It’s fairly common for folks who haven’t used mutation testing before to not immediately see the value in the practice. Mutation testing is, after all, still a fairly niche and under-used tool in the average software development team’s toolbox. So today I’m going to show a few specific types of very common problems that mutation testing is great at finding for us, and that are hard or impossible to find with other methods. This is the code that we’ll be working with today:

And here are the tests that we’ve written for that code:

Here’s what cover says about our tests: 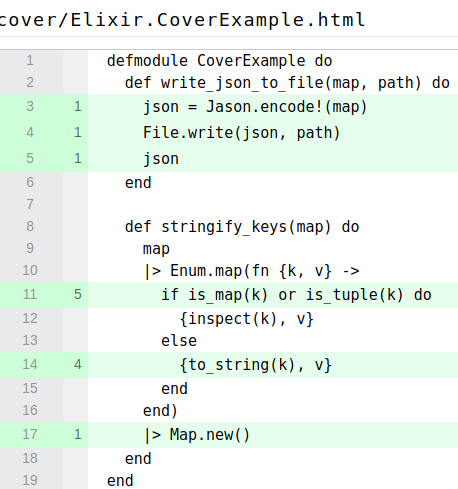 We can see here that we have 100% code coverage, so we should be all good in terms of testing, right? There’s no way we could have any bugs here, and there’s definitely no way we can reasonably break this code without causing a failing test.

Just kidding!! Neither of those two functions work at the moment, and we’re not testing all of the behavior in either of them despite “100% code coverage,” so it’s really easy to introduce a regression without causing a failing test.

The “multiple execution paths on a single line” problem

we wouldn’t see a failing test. This could be correct behavior, or we could be introducing a bug that might cause real problems for the users of our software - we just don’t know, because that behavior isn’t tested anywhere! This is one of the huge ways in which “code coverage” that just counts by lines of code executed in a test run falls short: it assumes that each line of code contains a single execution path through the code in question, and that’s often wrong.

Mutation testing, on the other hand, shows us if we’re missing test cases based on the logic in our code instead of based on the lines in our code. I think we can all agree that this is a far better measure of code coverage for an application, right?

The “untested side effect” problem

At first glance, the code in our write_json_to_file/2 function might seem correct, and it certainly is doing something, but based on those variable names I don’t think it’s actually doing what we want. If you run this test, you might see a strange file created on your filesystem:

Yep - the file path and the file contents are switched! And yet we have 100% code coverage and no failing tests, so all the feedback we’re getting is telling us that things are good. This is because we have an untested side effect in that function. And the real kicker is, like 90% of the really important and useful stuff that happens in most applications are side effects. If we’re not testing them, then we’re running a really high likelihood of a regression in an important part of our application.

Those first two problems I’d say are the biggest things that mutation testing can find for you that you can’t easily find through things like looking at code coverage based on LOC. This next problem however, is much more rare (although I still see it at least a couple times a year) and very Elixir specific, so I figured I’d include it here today.

Our test for write_json_to_file/2 is currently passing even though we’re probably not doing what the developer wanted it to do. Why could that be?

We’re missing a ^! The ^ (called the “pin operator”) is used to avoid re-binding a variable in a pattern match, but it’s super easy to forget them in tests, or to use the match operator = in place of the equality operator == in a test. In either of those cases, you’ll end up with a passing test where you shouldn’t have one.

Use computers instead of humans

The most important thing to note here is that currently, without mutation testing, the only way you’ll get feedback about these issues is from a human giving it to you. Either you’ll figure it out yourself as you’re working on the code, or maybe someone will pick it up in a PR review, or you’ll get a bug report from a QA tester or a user. But for most teams there’s no automated way of getting this feedback quickly and easily that will scale with a development team as it grows - this is where mutation testing comes in!

Code coverage is yet another thing that roughly follows the Pareto Principle. Code coverage based on lines of code executed gets you 80% of the way there and takes 20% of the effort. It’s easy to do, and it’s pretty good! But for applications that need (or want) a higher level of coverage, they’re going to need something like mutation testing to give them that extra 20% that other tools and techniques just can’t offer.